by Mike Hall in Life 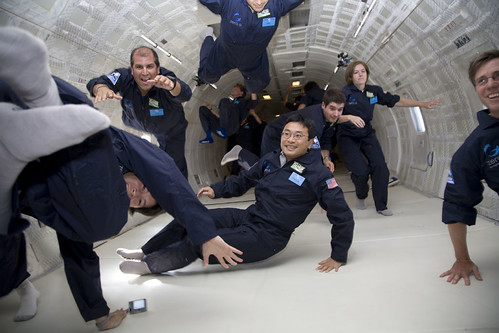 This aircraft is used to train astronauts in zero maneuvers, giving them about 25 seconds of weightlessness out of 65 seconds of flight in each parabola. During such training the airplane typically flies between 40-60 parabolic maneuvers. In about two thirds of these flights, this motion produces nausea due to airsickness, especially in novices, giving the plane its nickname. — Wikipedia entry on reduced gravity aircraft, a.k.a. "The Vomit Comet", photo courtesy kwc under a Creative Commons License

So there’s this moment where you’re just hovering, unmoored, between a state of going up or going down. Just there. You came from the ground, you’re going back to the ground. For that moment, though, maybe it seems like you could be going nowhere; or perhaps you’re in danger of going practically anywhere.

When you search for “vomit comet” photos you see a lot of expressions. Some people are smiling, some look very still and maybe afraid, some look determined … just 25 seconds to be in that state and learn the ropes of being that way before it’s back to normal.

I’ve never been in an airplane like that. I remember my first drop in jump school, though; the way it was so loud in the plane from the engine noise and the jump master’s shouting and the rush of the wind. Going out the door felt like what it might feel to walk in high gravity, not because of any of the physics involved but because it’s taking hours to walk five or six feet to the jump master who’s waiting to grab your static line, then more hours still to pivot and walk for the door. Maybe other people thought it was the same as walking out the front door in the morning, but to me it felt like walking into a wall of ballistic gel.

The door isn’t wider than one in your house, but between turning toward it and going out of it, it becomes as big as a drive-in movie screen showing nothing but horizon. Then out the door and the horizon flips and turns and spins. You’re not falling, you’re not flying, you’re not hanging. It’s just you and blue sky and green fields, and by the time you feel the snap of the static line telling you that one more thing has probably not gone too badly wrong, you’re in the middle of quiet like you haven’t heard in hours. You feel like you’re just hanging around up there, not going up, doesn’t feel like you’re going down. By the time you pull even with the tree line, though, you can tell Earth wants you back.

You land. Gravity works again. There’s noise, too, even if it’s just the Black Hats yelling at you to get off their goddamn drop zone, but sometimes because somebody lost a piece of gear up there and it lands right next to you with a whiz and a smack, kicking up sand. You look around, look up, orient and get used to being back down again. You start gathering your chute, bundling up silk and risers, stuffing it in a sack, and you run off the drop zone. You didn’t die, and for a few minutes maybe you’re that much more alive, but you’re not between anything anymore. Sky’s up there. Ground’s down here.

What Remains of That Digital Declutter

Back in March I started a digital declutter. There are lots of posts about how those things start, but not many about how it's going. These are some things I have been doing that have helped me feel more focused and intentional.

Notes on a digital declutter

I put some thought into how to apply digital minimalism. This is due for a rewrite and update, but it might spark some thought for people considering how to take a step back and clean out their digital closets.